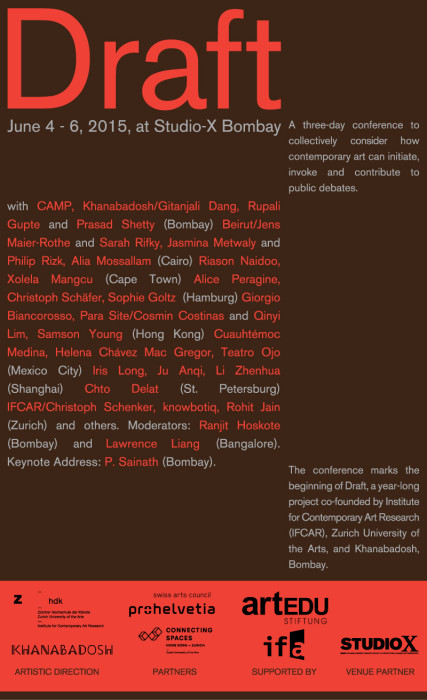 The conference, and subsequent project, will convene a cross-disciplinary crew of artists, curators, theorists and anthropologists from these nine cities, and will engage with critical discourses and practices in relation to the public sphere.

Draft encounters and tests public spheres and the consequences of staking claim to them through contemporary art. In doing so, it chalks out the relationship between the seemingly disparate contexts of these cities that are, in fact, always intensely entangled.

This longue durée project is bookended by two conferences; the closing conference takes place in Zurich in the summer of 2016. In the critical interim, a range of engagements, including research and workshops, will be realised in each of the cities. Expanding on the conference’s discussions, they will set the pace for site-sensitive artworks, which will be realised in early 2016.

Draft is imagined as a kind of agent provocateur; exploring our reality by hinting at the possibility of what else could be. If no context can ever be truly exhausted, then each exploration is a renewal of the promise of debate.

Draft is not ‘about’ the city but it mobilises this complicated ecosystem as a springboard for thinking through an infinite spectrum of artistic and philosophical concerns including history, urbanism and political agency.

The project intends to do this in a transnational scenario of home-grown artistic interventions, which question the notion of identity in a world that is nothing if not hybrid. The project intends to do this in the scenario of public spheres, which question extant public spheres in an epoch where dissenting contexts are rife with the rumbling sounds of deep matter, deep memory and deep alienation.

Draft is a proposal because every context is equal parts potential, problem and provisional.