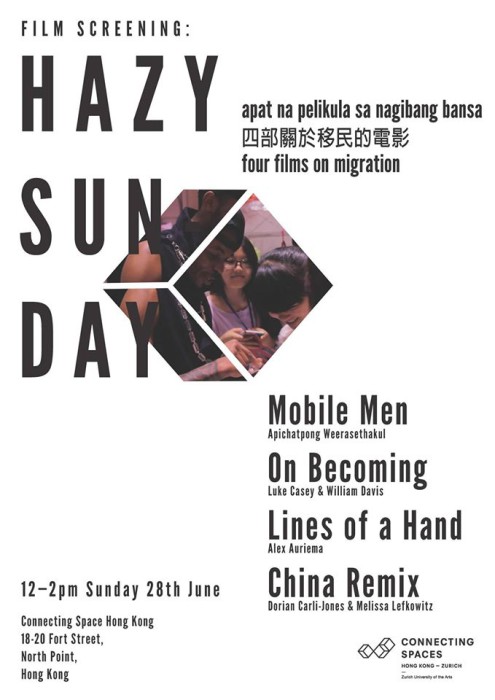 Two young men sit in the back of a moving truck, filming each others bodies with a handheld camera being passed back and forth. The backdrop to Mobile Men is the theme of migrant workers in Thailand arriving from it’s neighbouring states of Burma, Laos and others, and their deteriorating rights since the 2006 military coup.

3% of the population of Hong Kong are foreign domestic workers, this number being about 300,000, the overwhelming majority of which are women from the Philippines and Indonesia. The complexity of migration in this film is set against the aesthetics of massive infrastructural expansion, in this case the Hong Kong-Macau-Zhuhai Bridge project, which is set for completion in 2019.

Lines on a Hand

Shot over the course of two months in the region of Campania, Italy, this short ethnographic film follows the fragments of the life of a Senegalese labour migrant.

The city of Guangzhou is home to China’s largest community of African immigrants. This short documentary explores the city’s burgeoning African entertainment industry through the lives of three African hip-hop artists who are trying to find success in the face of China’s challenging labor and immigration laws. The film follows the entertainers as they prepare for their shows, perform, and live their daily lives with their Chinese and African family members and friends.