Presented by Para Site,  Ten Million Rooms of Yearning. Sex in Hong Kong is a multi-venue and multi-chapter group exhibition looks at the connections between desire and Hong Kong’s society and historical conditions. It explores the many ways in which desire and sexuality are manifested, hidden, altered, and replaced by various factors, from family structure and class, to architecture’s role in shaping intimacy and to capitalism’s over-determination of the public space. While the exhibition departs from Hong Kong, it creates propositions meant to understand a more universal contemporary condition. It includes seminal works from international artists and historical figures from Hong Kong, alongside emerging artists from the city and the region.

Connecting Space Hong Kong (by courtesy of Zurich University of the Arts) hosts one of the two main clusters of works. It is a central component of the exhibition but it is conceived to also be accessible to the public as an autonomous entity, given the relative physical distance from Para Site. The exhibition at Connecting Space focuses on a discussion of intimacy and socialization in the contexts of private space, family relations and commercialization of the public spaces in the city; architecture, regulation, urban planning and negotiation of power; it also looks more closely at issues of gender within the framework of the exhibition.

Recent studies have shown that Hong Kong has one of the lowest sex drives in the world. There are several reasons for this. As one of the only Chinese societies not to undergo a modern revolution, the city never experienced the sexual liberation movement found elsewhere. Moreover, Hong Kong maintains some of the Victorian values of morality and respectability rooted in its colonial past. Its unique history has also brought a disproportionate focus on Christian ideals to public policy and power circles.

Costinas said, “The post-handover years have shown a trend toward increased conservatism and a greater reluctance to explore sexuality in the media and art. One of the aims of the exhibition is to understand better the drivers of this trend and ignite a discussion about sexuality in Hong Kong.”

The exhibition also explores the unique socio-economic conditions in Hong Kong that may suppress sexuality. Small living quarters, high population density and a tendency to live with parents inhibit intimacy and privacy. This is juxtaposed to the city’s public space, which is oversaturated with messages designed to arouse and with promises of desire. In the family environment, sexuality is not a priority post youth and is usurped by other activities such as playing video games designed to substitute for real-life sociability and human interaction. 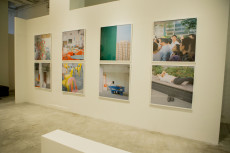 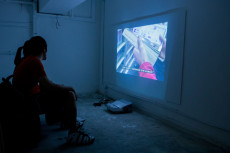 Hito Steyerl is a filmmaker, writer and middle aged single mom. Steyerl’s films and essays take the digital image as a point of departure for entering a world in which a politics of dazzle manifests as collective desire. This is to say that when war, genocide, capital flows, digital detritus, and class warfare always take place partially within images, we are no longer dealing with the virtual but with a confusing and possibly alien concreteness that we are only beginning to understand. Today the image world, Steyerl reminds us, is far from flat. And paradoxically it may be in its most trashy and hollowed out spots that we can locate its ethics. Because this is where forms run free and the altogether unseen and unrecognized toy with political projects at the speed of light. It is where spectacle and poverty merge, then split, then dance.

Nguyen Tan Hoang is a video artist and academic whose work interrogates forms of desire in queer Asian male identities, Vietnamese diasporic cultural production, and Southeast Asian cinemas. He uses “existing imagery – found footage considered to represent official records as well as out-of-date media detritus – to generate new narratives about race, sexuality, gender, and nationality. The re-presentation of this found material, often supplemented by original footage, situates the personal within larger social, political, historical, and aesthetic processes. [His] art making is animated by various pleasures: the pleasure of being touched and moved, the pleasure of being addressed and recognized, the pleasure of critical response, and the pleasure of practical intervention.”

Dr. Petula Ho Sik Ying is Associate Professor at the Department of Social Work and Social Administration at the University of Hong Kong. Her main research and teaching interests are in the area of homosexuality, gender and sexuality issues. She has made important contributions to the development of a dynamic theory of gender and sexuality that will help problematize feminist theories and resist Western hegemonies through empirical case studies that make connections between discourses, cultural practices, political economy, and social change.

Isaac Leung is a practicing artist, curator and researcher in art and culture. His passion in exploring issues in contemporary art began during his time in college. From 1998-2008, his artworks were exhibited in over 30 venues across the globe.   In 2013, Leung was appointed as the Chairman of Videotage. During his tenure, he initiated and participated in projects that included exhibitions, workshops, lectures, publications, online projects and symposia. In 2005, Leung was appointed as the working group consultant of the award-winning international exhibition “Body Movies in Hong Kong” that was presented by the Home Affairs Bureau, HKSARG. Leung was appointed as Advisor of the Digital Community of Prix Ars Electronica. The creative practice in artistic and curatorial projects has prompted him to conduct substantial research on art and culture.

Para Site is one of  Hong Kong’s leading contemporary art space and one of the oldest and most active independent art centres in Asia, today announced the opening of Ten Million Rooms of Yearning. Sex in Hong Kong. This groundbreaking exhibition features a broad spectrum of international and local artists and focuses on the relationship between sex and desire in the context of Hong Kong society and history. The exhibit is being presented in five disparate Hong Kong venues to illustrate the city’s diverse landscape. 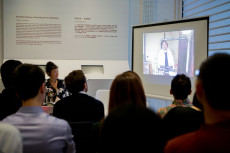 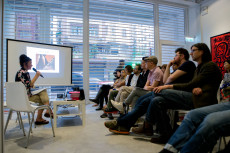 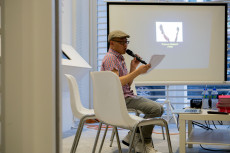 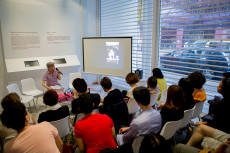 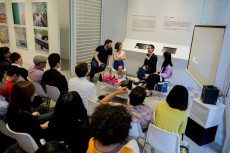